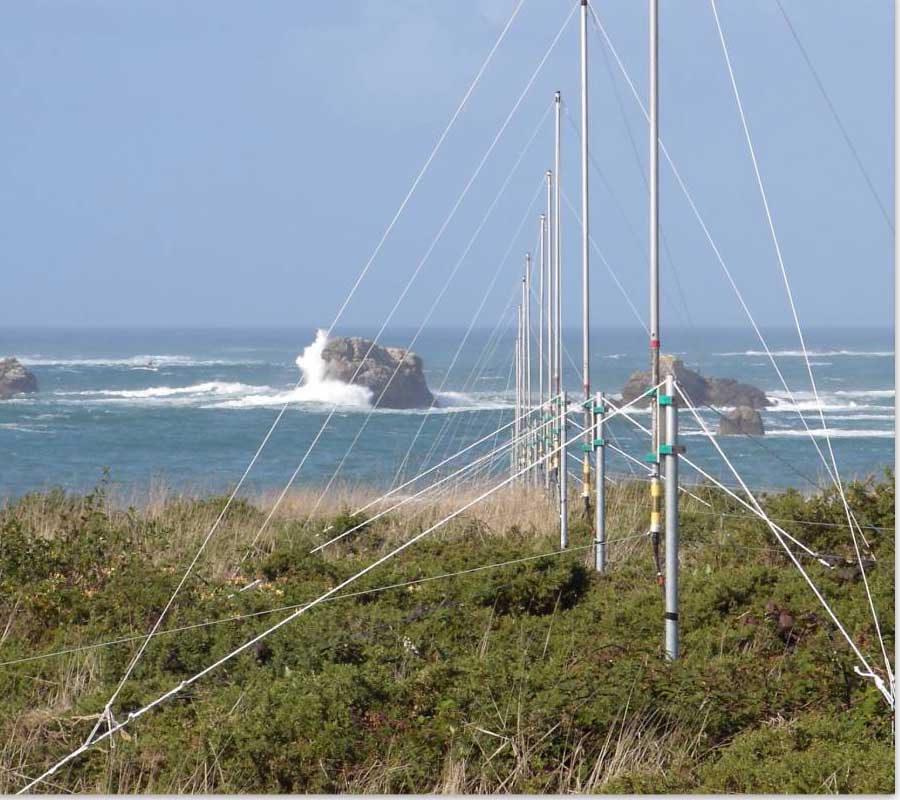 WERA is an Oceanographic HF Radar providing simultaneous measurement of:

These measured data are available

Receive antenna array on Key Biscane (left) and (right) surface current map during the passage of Tropical Storm Henry on the 5th of September 2003 east of Florida. (Data are kindly provided by Prof. Nick Shay at RSMAS)

WERA provide a lot of useful data for various applications. Typical users are:

The system was developed in co-operation with Institute for Oceanography of the University of Hamburg. A first production stage system passed its field test at the Spanish west coast near Gijon in October 2000. In the meantime over 20 further systems are installed world wide.

The WERA (WavE Radar) is a shore based over the horizon radar with a range of up to 200 km, depending on the operating frequency. The system concept is broadband and modular to optimise the configuration to the users requirements. The main features are:

Oceanographic High Frequency Radars are simple in concept: electromagnetic waves (EM) sent to the ocean are backscattered on surface waves of exactly half the radio wavelength, just like X-rays are scattered in crystals.

Since the ocean is generally covered by waves of many different wavelengths and directions (continuous spectrum), there are always trains of waves propagating toward and away from the radar. The return signal from either train will be Doppler-shifted by the wave velocity, which is known exactly by the gravity wave dispersion relationship. Thus the spectrum of the return echoes consists of two peaks, symmetric with respect to the transmit frequency, in the absence of currents.

Typical backscattered spectrum. The main spectral peaks correspond to the incident signal Doppler-shifted by the motion of the Bragg waves (after Gurgel, 1999).

If the waves ride on an ocean current, the return signal is further Doppler-shifted by the radial component of the current, which can be readily estimated. With two radars some distance apart along the coast, vector currents can be computed.

This is a precise concept, which surprisingly has taken more than three decades to be accepted by the oceanographic community (a list of early references compiled by Robert Stewart can be found here). Yet unlike Acoustic Doppler Current Profilers (ADCP), the scattering targets are well known, and well understood theoretically.

Wind direction can be inferred from the amplitude of the main peaks, and multiple scattering allows the extraction of spectral information on the wave field.

Although they have historically been called “radars”, they have nothing in common with microwave navigation radars; they in fact use very low power transmitters in the high frequency band (3 to 50 MHz), much like Citizen Band radios.